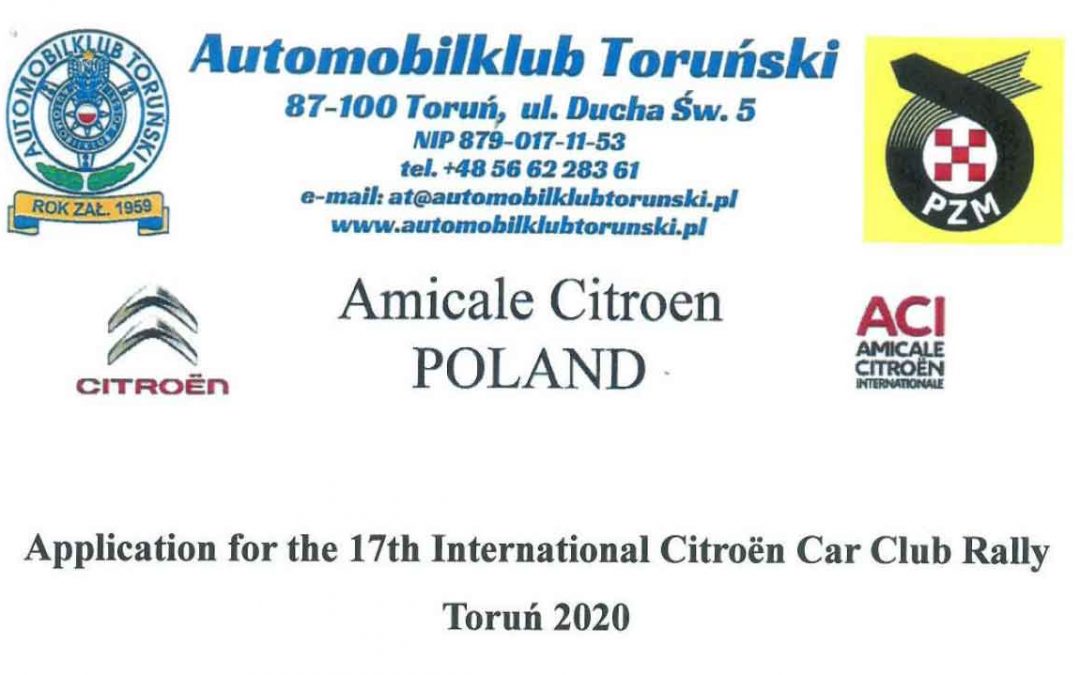 we are very happy to inform you that the team who successfully has executed the “2CV World Meeting 2015” in Torun/Poland (=ACI Event Of The Year 2015), now has also handed in the application to host the ICCCR (International Citroën Car Clubs Rally) in 2020 in Torun.

Next to the team of Automobilklub Torunski (headed by Czeslaw Nosewicz) who at the same time are also the ACI Delegates for Poland, also the Mayor of Torun (Michal Zaleski) and the Marshal of the Kujawsko-Pomorskie (Piotr Calbecki) have expressed their interest to support the execution of the event in Torun again. (see attached scan of documents).

We are excited to see that last year’s “ACI Event Of The Year” has left such a good impression also in the region.
Some event statistics here:
http://www.2cvpoland2015.pl/2CVMeetingPoland2015Stats.pdf

We also congratulate the Poland team again both for the successful execution last year as well as for the application for 2020.
Many Citroën enthusiasts have enjoyed a great event during last summer and experienced not only the great hospitality but also the country and touristic highlights within Poland and thus also have a positive memory of this time.

As you know, the formal decision for an upcoming ICCCR is taken by voting during the ICCCR before.
This means a decision for ICCCR 2020 will be taken during this year’s ICCCR 2016 (NL).

So far, we have received only one (=this) application for 2020. We hope that many of the ACI Delegates can also attend the Dutch event (11-14 Aug 2016, www.icccr2016.com) and look forward to seeing you there and vote for the next event!