Unfortunately, the COVID-19 disease has also caused some impact on the International Citroën Car Clubs Rally (ICCCR), traditionally held every 4 years, and for this year planned to be executed in Torun/Poland.

We have received this official statement: 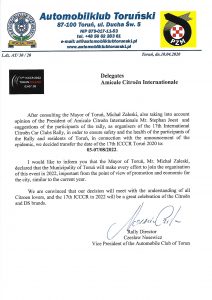 After consulting the Mayor of Toruń, Michał Zaleski, also taking into account opinion of the President of Amicale Citroën Internationale Mr. Stephan Joest and suggestions of the participants of the rally, as organisers of the 17th International Citroën Car Clubs Rally, in order to ensure safety and the health of the participants of the Rally and residents of Toruń, in connection with the announcement of the epidemic, we decided transfer the date of the 17th ICCCR Toruń 2020 to:

I would like to inform you that the Mayor of Toruń, Mr. Michał Zaleski, declared that the Municipality of Toruń will make every effort to join the organisation of this event in 2022, important from the point of view of promotion and economic for the city, similar to the current year.

We are convinced that our decision will meet with the understanding of all Citroen lovers, and the 17th ICCCR in 2022 will be a great celebration of the Citroën and DS brands.

The ACI fully supports this decision, and warmly welcomes the team’s initiative to once more prepare for the ICCCR in two years time from now. We also would like to thank the Mayor of Tórun in his support for the world meeting of all Citroën in two years time.

Our message to all – stay healthy and safe!

On behalf of the ACI Board
///Stephan Joest, President ACI.