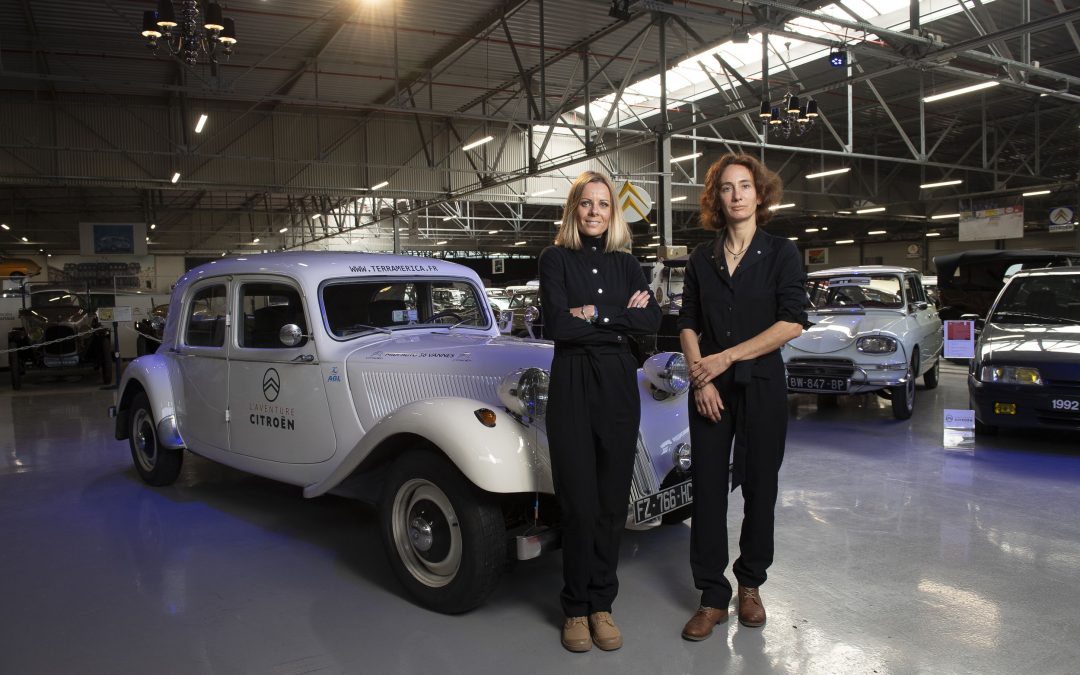 The press release from Automobiles Citroën, dated 26-May-2021:

THE CITROËN TERRA AMERICA ADVENTURE IS ON!

The Citroën Terra America Adventure set off on 26 May from the Citroën Conservatoire in Aulnay-sous-Bois near Paris. At the wheel of a 1956 Traction Avant 11B, two adventurous women are heading for the American continent, where they will make the journey from Alaska to Ushuaia via the Pan-American Highway, the longest road in the world.

In the spirit of the Citroën cruises, this unprecedented journey through time and the history of the Americas aims to raise awareness of the plight of the 21 indigenous peoples encountered during the 40,000 km journey, which will cross 14 countries in three stages from July 2021 to January 2023.

As official partner and title sponsor, Citroën is supporting the expedition and providing the expertise of “L’Aventure Citroën”, the organisation responsible for its heritage, for the preparation of the car and technical support during the adventure.

First highlight: the departure of the Traction Avant:

Citroën and the L’Aventure Citroën organisation are partnering on an extraordinary expedition led by two women to cross the American continent from North to South in a Traction Avant. The duo set off on the 26th May from the Citroën Conservatoire. The “Citroën Terra America Adventure” will take them from Alaska to Tierra del Fuego, and allow them to meet 21 indigenous peoples along the famous Pan-American Highway, the longest road in the world.

THE HERITAGE OF CITROËN CRUISES IN A LEGENDARY CAR

The Citroën cruises in the 20th century stand as a vital chapter in automotive history and human adventure. Conceived and undertaken by André Citroën from the 1920s onwards, the expeditions bear witness to the importance of the car as a means of exploring the world and bringing people together.

The Citroën Terra America Adventure kicked off on the 26th May, setting out from the Citroën Conservatoire, a symbolic venue that looks after the largest international collection of Citroën vehicles. Among the 280 exhibits, the Traction Avant and the vehicles that took part in the famous cruises, were also on show on the day of departure.

“Today we are kicking off a challenge like those organised by André Citroën! The Citroën Terra America Adventure has all the ingredients to stir the imagination as much as the Citroën cruises once did.” Stéphane Barbat, Head of Partnerships at Citroën.

“Our organisation works to preserve, share and bring to life the fabulous history of Citroën, which has revolutionised the automobile industry since 1919. We are delighted to support this project with the help of clubs around the world.” Xavier Crespin, Managing Director of L’Aventure Peugeot Citroën DS.

The Traction Avant is a legendary car. In addition to its unique transmission, it brought together in one vehicle the most modern solutions at the time, including an all-steel monocoque structure, hydraulic brakes and four-wheel independent suspension. Launched in 1934, the Traction Avant’s robustness and mechanical simplicity make it a remarkable rallying car even today, more than 80 years later. In addition, its appeal has grown over the years, in France and around the world.

“The aesthetic charm of the Traction Avant will be a real asset for the spontaneous and positive contacts it will generate!” Fanny Adam, Head of the Citroën Terra America Adventure expedition.

THE BOLD CROSSING OF THE AMERICAS

This unprecedented journey of 40,000 km through 14 countries is in keeping with the genes of the Citroën brand: an automotive expedition on a human scale. At the wheel of their legendary Traction Avant, an icon in French automotive production, the two explorers will meet the indigenous peoples of America who stand up for a more ethical, responsible and united vision of the world.

“We are proud to have Citroën, the L’Aventure Citroën organisation, the Citroën dealership in Vannes and the Amicale Citroën Internationale, which brings together Citroën clubs outside France, involved in our project. I would like to thank them for their trust and invaluable assistance.” Fanny Adam, Head of the Citroën Terra America Adventure expedition.

Besides these encounters and their accounts, which they will disseminate widely, the two women will travel on a legendary road, the Pan-American Highway, with its extraordinary sociological, geographical and climatic contrasts. They will travel across the sumptuous natural landscapes of the Americas, including the historic sites of the Mayan and Inca civilisations and stunning megalopolises, as well as the peaceful road crossings. The expedition will feature a true parallel between modern civilisation and indigenous culture.

“Harnessing boldness to serve people is a key value in the Brand’s DNA. We are pleased to join forces with L’Aventure Citroën and support Fanny Adam in her project to cross the American continent to meet indigenous people on board a Traction Avant, as title sponsor of the expedition.” Stéphane Barbat, Head of Partnerships at Citroën.

AN EXTRAORDINARY HUMAN ADVENTURE BY AN ALL-FEMALE DUOS

Fanny Adam, who initiated the project and is in charge of the expedition, is a curious and determined young entrepreneur. Mindful of the plight of the indigenous population, and eager to meet new people and enjoy unusual journeys, the Doctor of Science is setting off on a singular journey that she has chosen to make in a Traction Avant. She discovered and fell in love with the car through Gérard d’Aboville, who rowed solo across the Atlantic in 1980 and the Pacific in 1991 and has competed in various rallies, including three Paris-Dakars, one of them on a motorbike. Gérard has been driving a Traction Avant since he was 18. Fanny, his colleague, got the chance to discover the car and borrowed it to compete in a regularity rally and to travel the roads of Europe. Gérard made a major contribution to the technical preparation of the car for this extraordinary adventure.

To start the expedition, her co-driver is Gaëlle Paillart, responsible for capturing images. Gaëlle is a sportswoman with a passion for travelling and a solid scientific background. Sport travel has become a way of life for her. She will be the first co-driver to embark on the Citroën Terra America Adventure expedition between Prudhoe Bay and Los Angeles.

Maéva Bardy will then take over, also responsible for images of the expedition to Ushuaia. Maéva has been travelling the world for years as an image reporter and documentary filmmaker. Sensitive to nature and the environment, Maéva regularly participates in scientific expeditions as an on board correspondent.

At the beginning of June, the Traction Avant will embark on a ship bound for Alaska. Fanny Adam and her teammate will join the car in early July at the starting point in Prudhoe Bay at 70°N. The first stage will be in North America, from July to September 2021. The following stages (in Central and South America) will be organised in the same spirit, which is not that of a race, with no set arrival date. Latin America will be crossed from January to May 2022 and South America from October 2022 to January 2023.

Citroën will relay the major stages of the Citroën Terra America Adventure. The images shared by the duo will enable us to follow the journey and its mechanical issues, surprises, unusual encounters, and visits to major sites, both natural and urban. In each of the countries crossed, the expedition will liaise with classic automobile clubs such as L’Amicale Citroën Internationale, which will provide logistical support where necessary and constitute a privileged local contact for any situations that may arise. The crew will also be accompanied by other Traction Avant and classic vehicles, with many great encounters in sight!

The route can also be followed in real time thanks to the on-board navigation system. As with the Vendée Globe sailing race, enthusiasts will be able to follow the car’s progress live on a map via satellite relay and enjoy an unprecedented immersive experience of the expedition by means of the images, videos and stories sent regularly along the journey:

Additional information about the vehicle (translation by Amicale):

The team has chosen this Traction Avant Citroën 11B Grand Raid for the qualities that this type of Grand Raid preparation brings. This Citroën Traction 11B, which left the Javel factory in April 1956, was bought in 2005 by Robert Muller. This supplier of special mechanical parts for rally cars has specially adapted the car to carry out great raids for 15 years with the associations:
Tractions sans Frontières, Globe Drivers, Traction Euro-Travel and La Traction Universelle.

From 2006 to 2017 the car already has traveled a lot around the world: Australia, Morocco, Russia, Italy, Northern Europe, Argentina, Malaysia, Thailand, Andes Mountains, Sardinia, Corsica, Greece, Portugal, Sicily. Year after year, the preparation has been perfected, taking into account the experience acquired by all the participants in these raids, to arrive at what is considered today as the ultimate in the field. Since these trips, the car has been completely revised, the engine rebuilt (5000 km at purchase).

Thus prepared and equipped with the spare parts kit supplied by the Aventure Citroën team, the Traction Avant is ready for the Pan-American Rally! 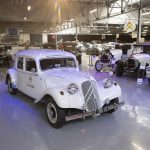 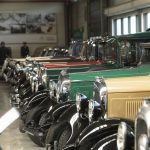 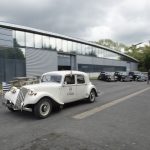 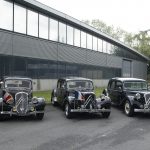 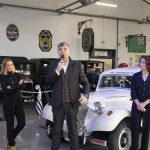 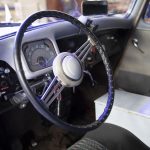 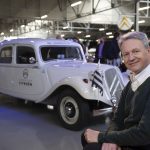 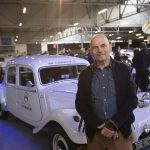 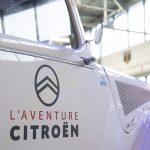 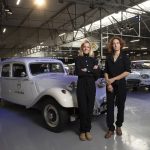 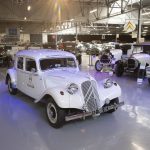